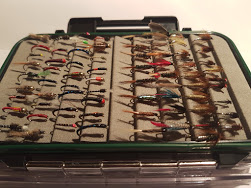 Well, it’s the start of a new trout season. Well, for most of the country that is; but for us in the Northeast of Scotland and … Read more