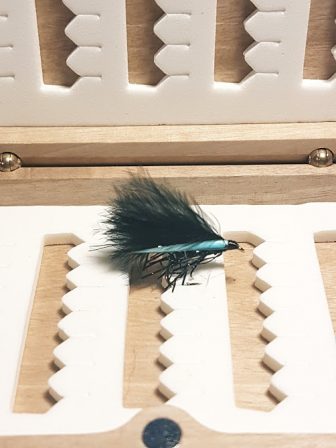 I am about to list a new fly category to Granite City Fishing the Cormorant Fly. It’s a fly i have actually never used so i had to do some research on it and i have came up with this description on the fly and how to fish it and most importantly some pictures of my flies that are for sale @ www.granitecityfishing.co.uk.

The cormorant is a small black fly that has become very popular with stillwater fly fishers in the UK. It’s a very simple pattern; consist of a usually skinny body, a small wing of black marabou and sometimes some cheeks or a bit of flash for added attraction.

Cormorants don’t imitate any specific aquatic invertebrates, but they also look a little bit like a lot of them, which probably explains why they can work so well.

A cormorant fly could fool a trout into thinking it was a nymph, a buzzer, a fish fry or even a snail. Whatever the trout think they are, cormorants definitely work and at some fisheries they’re among the top flies in the catch returns book almost every day.

Cormorants are usually fished in teams of two or three, often alongside brightly coloured attractor patterns such as blobs and boobies.

When fishing cormorants alongside other flies, the cormorants usually go on the droppers with either a blob or booby on the point. Competition fly fishers reckon that the trout are attracted to the colour and water disturbance caused by pulling the blob or booby through the water but often turn and take the cormorants instead.

Cormorants are usually black, but you can make them in any colour.

Modern cormorants now often have a holographic rib, a goose biot cheek or some kind of fluorescent dubbing or thread to act as a hot spot or trigger point for fish.